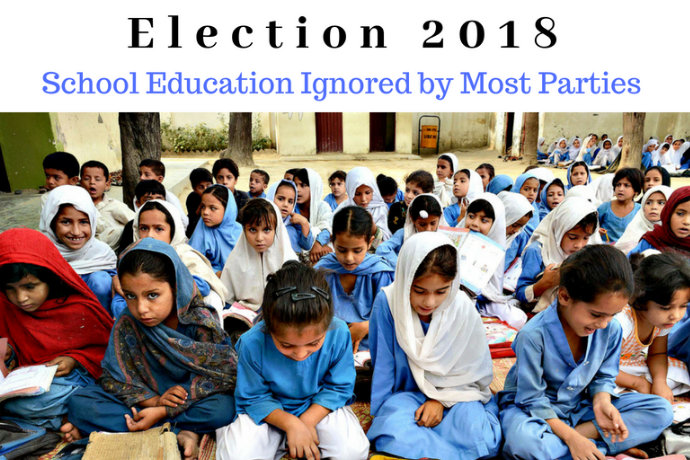 So what are the political parties offering in terms of education for the nation? It is extremely disappointing to see how unimportant this matter is for these parties. Criticizing each other and blaming one another for the condition of the country is all that they are concentrating on during their campaigns.

The Pakistan Muslim League- Nawaz (PML-N) has promised the establishment of high-quality institutes and universities. It wishes to increase the budget for education by 0.5% of GDP. It aims at setting up a National Academy for Higher Education in order to bring the best ten universities in Pakistan to the level of “the top 100 in Asia and 500 in the world”. The increase in the budget is quite a disappointing number while early education has been completely ignored.

The numbers given by The Pakistan People’s Party (PPP) are impressive i.e. they want to see a 5% increase of the GDP in the education budget by 2025. Again there is no emphasis on raising enrollment in universities and no mention of early education.

The Awami National Party (ANP) wants to raise the education budget by 6% of the GDP and believes it is crucial to declare an “educational emergency on a national level.”

The Pakistan Tehreek-e-Insaf (PTI) seems to be the only party concerned about the poor enrollment in schools and lack of attention given to women education. It has improved the education standard in the past 5 years. It applied a transparent recruitment system and took help from international parties to track progress.

It is very unfortunate to see a nation that strived to become an independent nation and has failed to fulfill its dreams and aspirations. Quaid-e-Azam wanted to see a Pakistan that is run by Islamic values and governed by Islamic rules. We as a nation are so confused that we wish to follow the west as far as fashion and trends are concerned but we do not apply their educational policies. If we are to have a strong educational background we need to incorporate strong Islamic values such as being a good human being i.e. teach values of sharing, being sensitive towards unprivileged people, giving to the poor etc.

Private schools are simply copying the school décor and syllabus of western schools and not the moral values taught in those schools. We need to learn from Japanese schools where children at a small age are not burdened with bookish education but are taught moral education.

Public schools lack the resources and funds to be even called schools. Whoever wins the election needs to pay serious attention to this sector. If we are not educated, how will we become a responsible nation? How will we run metro buses, become doctors, pilots and engineers? How will we have educated mothers who need to educate their children?

We need to work on basic facilities i.e. water, electricity, and shelter. But at the same time, we need to educate our nation in order to provide a manpower that can create these facilities, enhance them and protect them.