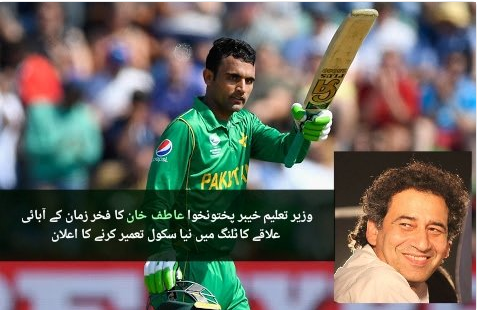 Educational Minister Atif Khan announced will build a new school in Katlang-Mardan Khyber-Pakhtunkhwa and name it after Fakhar Zaman. Fakhar Zaman the opening batsman who recently played a vital role to beat India in ICC Champions trophy 2017 final in Oval-England.

K-P Minister for Elementary and Secondary Education Atif Khan called up the star batsman, who belongs to Katlang tehsil of Mardan district, on Monday and congratulated him on his performance and the team’s victory against arch-rivals India.[Tribune.com](https://tribune.com.pk/story/1440511/k-p-govt-build-school-named-opener-fakhar-zaman/)